Trip to Knitter's Underground and temporary loss of good sense... 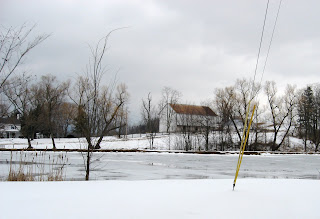 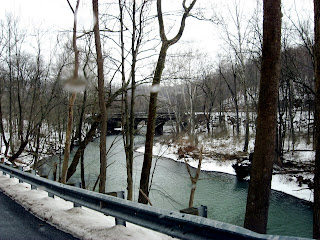 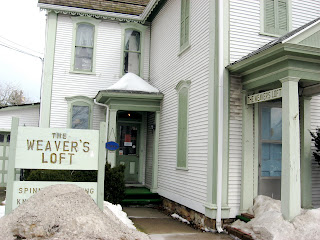 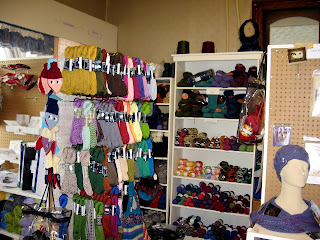 After work today I took advantage of a little extra time in my schedule and a break in the weather and drove 20 minutes out of my way to go to a semi-local yarn store in Centre Hall, PA. Driving there had the added bonus of taking in the inspiring wintry landscapes of the area. It was a magical drive that cleared my head of preoccupations and stress. My destination: The Knitter's Underground. If you are anywhere in the area, by all means, check it out. If you are at all interested in color stranding, they have every possible color of Jamieson and Smith you could imagine. Not to mention all sizes of Addis at any given time. Major massive amounts of magazines and books. More Regia sock yarn than you can shake a stick at. Cute adorable knitting notions for the junior set. Plus the owner is a former nuclear physicist from Los Alamos who has a second career as a fiber maven. How cool is that? I made it out of there with the only thing I came for: more Addis for my maniacal two-circular sock drill.

Knitter's Underground was not the site of my temporary loss of good sense. That came afterwards, in the privacy of my car...

Now, we all do inappropriate things at times in our lives. There is garden variety inappropriate: speaking out of turn, jaywalking (not the socks), not recycling when no one is looking, not observing the three-second rule. And then there is inappropriate. Like, knitting while driving inappropriate.

Yes, today I gauge-swatched behind the wheel. I am a hideous human being. 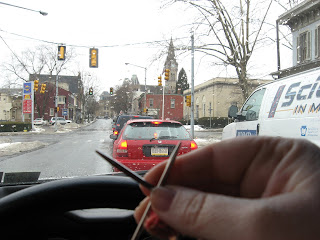 I have talked about the obsessive urge to knit on this blog before...but today was an egregious transgression of safe driving and appropriate stitching guidelines, even for me. I mean, how did I get to this point? How does a reasonably sentient human being suddenly reach for her needles while operating a moving vehicle?
I know that there are plenty of knitting fools out there, so tell me this: what is the most inappropriate time/place/moment that you've ever knitted?

It sounds like you had fun at the yarn store!
I haven't ever knit while driving yet. I'll have to think about other inappropriate places. ( I thought about bringing my sock to the symphony...)

There are so many yarn stores near here I had no clue, at least I don't think I'm "that" far from centre county...but looks like you had fun! The only place I have taken my knitting to are soccer and fb practices not sure how inappropriate that is. The day they come out with a basket for knitting that sits in the bathroom!!! I'll shake my head LOL

Please tell me you only knitted at red lights, and not while your car was in motion!!! I haven't done it yet, but would it be inappropriate to knit in church at a wedding? Yeah, I guess it would, huh?

I have knit while driving. I'm embarrassed to admit it, but I have.

Sounds like a wonderful drive - to a really wonderful destination. Glad you cleared your head too :)

whoooo! better watch out for a fender bender involving airbags! ouch! you'd be made into a pin cushion with those needles ;)

inappropriate? i don't think i've knitted anywhere inappropriately. i have been accused of knitting in church! first of all, it was the one time i went to church in at least 15 yrs (i was home babysitting niece & nephews), and i did not take my knitting. but, the kids told my mom i was knitting in church. all three kids believe this very much. i think they're just use to seeing me knit all the time that they can't see me without needles.
i have knitted at the symphony (finished the foot of a sock) and i have knitted in the emergency room (4 hours of lace shawl knitting)(even the ER doctor commented).
i have knitted at dinner, lunches, brunches, etc (and an old beau was quite offended that i paid more attention to my yarn than to him)(he's gone now ;)
though i don't knit fairisle, i would had been so in love with those bins of jamison's shetland!

I used to always bring projects to my daughter's basketball games. I told her I only knit when the other team had the ball! She believed me when she was 7. Now that's she's 16, she's really pissed.

And here I was thinking that the fratty frats in their ATVs on cell phones were the bane of human existence... but let's not lose sight of what's important here--you got gauge!

WOW!! You are one CRAZY Knitter!! I'm not worthy! Love the pictures. they are very inspiring...I am guilty of stealth crocheting while building servers...one time I had to unrack a monster server cuz I dropped a crochet hook inside and didn't realize it until I reached up on the shelf to continue my project. I must have bumped the shelf. :)

wow, knitting while driving. that's a new kinda crazy! i would definitely get in an accident ...

Hey, thanks for your comments on my (new) blog. I will see if I can sustain both the knitting and the food blogs!

It's funny but I was just going to write to you to say I like your blog--and I have particular interest because I'm originally from PA (Reading area). I have sympathy for you stuck there in Central PA, or as you called it "Nascar, PA." :)

My grad student fiancé is half-French/half-Puerto Rican, and his mother is a French teacher, so I thought that we had some things in common!

I too have knitted socks while waiting in traffic in Morgantown WV. Two fears- bumping into the car ahead and not finishing the row on dps before traffic moves again.

I wonder how far that Knitter's underground is from Pittsburgh?

I don't think I have ever knit anywhere inappropriate. I will have to work on that. I usually take my knitting with me anytime I think I will be able to get some in waiting or if the hubbie is driving.

What a charming yarn store. I think I could spend days in there. I'm not sure about the most inappropriate time I've knit--probably at parties and dinner parties.

I must admit to knitting hile being behind the wheel. Yes , the shame... I know. I once, VERY BRIEFLY considered taking my knitting to a long Catholic funeral of someone I didn't really know. After a second of "Could I? Should I?" and But, I realy want to", I deemed it highly inappropriate and left it in my car!

ooh this looks great!! and so much fun...

i think to knit at a funeral depends on the relationship between you and the deceased. i would certainly knit at any family member's funeral, and i'd probably be drunk too. and, there are friends whose (?) service i'd knit through as well. i don't really mind scandal. i'd rather be remembered as the woman that knit indiscriminately than a sobbing wreck dressed in black. perhaps i'd knit black socks ....

We have knit while driving! One of us wasn't very successful at 45 mph. But she did it in stop and go city traffic. The other of us did it while going down the street at 20 mph but had to stop knitting for turns. So much to knit, so little time!

The things we do while driving, huh:) I love all these photos.
Ahh, Regia yarn...just knitted with it.

I-75 heading north to the Saturday Morning Knitting Club, in a snow storm. I finished 14 rounds of my plain vanilla sock.

I think we all had boyfriends who drove with their knees...mine actually taught me how. Then there's just so much time for other pursuits... For the record, there's very littie traffic on the northern end of the highway here...

I knit through my daughter's wedding (she knew I would and it kept me from freaking.) I also knit in church. Pastor's cool with it...it keeps my puny ADHD brain focused on him and not what everyone else is doing...