Turn a Square for Claire

Well, my hilarious Knitting Olympics hopes of gold, as expected, about as viable as those of my Olympic boyfriend Johhny Weir (totally robbed btw). The FLS is about 1/3 of the way done. Which is fine--I'm loving the pattern and Cascade 220 was such the right choice. So, sometime next week when the name 'Lindsay Vonn' is but a distant memory, I will be sporting this baby in style.

But fear not--I did actually complete a project during these auspicious games. A hat for a five year old mind you, but hey, it's done and I'm quite happy with it. Several weeks ago I made a hat for Meredith's son Ellis, and so it was only matter of time until I obliged his big sister, Claire. Enter the most adaptable hat pattern ever, Turn-a-Square...

The Specs:
Pattern: Turn a Square by Jared Flood
Yarn: MC Malabrigo Worsted, 1/4 a skein in 'Shocking Pink'; CC 1/3 of a skein of Mochi Plus in 'Strawberry-Lime Rainbow' (the name is gag-worthy, but the yarn works).
Needles: size 5 & size 6
Mods: Because this was for a 5 yo, I went down several needle sizes and cast on 88 sts. At the increase round, I only added 4 sts for a total of 92 sts. I knit 3.5 inches from the cast on before the decrease row.

I wanted to use some crazy pink Malabrigo remnants for this pattern and was delighted to find out that it matched the Mochi Plus gauge-wise perfectly. Both are single ply yarns and look perfect together.

I think I might have a new go-to baby knit. This pattern is so easy to adapt, and rather than get sucked into to the vortex of the Baby Surprise Jacket (which always takes about 2x longer than you think it should), you could pound these out for the Dion quintuplets in no.time.flat.
Posted by The A.D.D. Knitter at 4:12 PM 19 comments:

Sounds like a new illicit drug, right? If only. I could use a newer, cleaner buzz these days as the whole hourly dosing of caffeine + lifesavers routine is getting harder and harder to maintain. While I contemplate my options (Swedish Fish and Red Bull?), please to note that I have completed a pair of socks.

The Wayback Time Machine of Ravelry tells me that I started these socks back in 2008, so these only took oh, 16 months. To say that my sock enthusiasm has waned would be an understatement. I don't know what it is, I'm just not feeling the sock love anymore. I thought that by picking these back up I might rekindle the joy but no. I feel nothing. Socks are dead to me. If you happen to see me buying sock yarn at Maryland Sheep and Wool, Rhinebeck or some other yarn venue, you have my permission to accost me & engage in some sort of ritual shaming. I would in fact undertake a destash of epic proportions were it not for a. shawls and b. the desire to not deal with cheap ass mofos whose bad manners, lack of follow through and 'I'll PayPal you when I get off work' promises crush my tender heart and get my goat.

Not only does sock knitting feel like some remote interest, like the 5 minutes in 2003 when I was interested in stamping (Babs will never let me forget that unfortunate hobby), even the socks themselves don't quite ignite my interest. When doing the photo shoot for these today at work, my model Sandrine noted how soft and comfy they were. I instantly gave them to her without a second thought. "Oh, you want 'em?". What is wrong with me?

My knitting interests seem to reside elsewhere--because I am hauling some major ass on my February Lady Sweater. I mean this project is firing on all cylinders, and I am so motivated to finish it. Every time I'm on Ravelry I spend at least 20 solid minutes trolling through the gallery of finished projects and thinking "...mine....soon I will have one of my very own that will be MINE!". So, my new knitting motto is this: it's better to concentrate on projects that make you feel hopeful rather than deaden you soul.
Posted by The A.D.D. Knitter at 10:03 PM 38 comments:

My latest FO is destined to be in my Top Ten Pantheon of All-Time Sweet Ass Knits®. I am talking about the Tea Leaves Cardigan, the most legendary viral cardigan to hit the Intertubes since the FLS (see below). Babs is responsible for this particular mania--she and I had a flurry of texts about this pattern a while back (what--you don't do that?) and I became officially obsessed. I knew that this most perfect cardigan and I were destined to be. But what yarn? What YARN?

Excessive, non-specific MDS&W yarn purchasing to the rescue! Luckily my craven little lemming heart was just desperate to nab some Mas Acero in the Brooks Farm booth, and as it turns out, this is the perfect yarn for this project. Variegated--yes, but not dizzyingly so.

The Specs:
Pattern: Tea Leaves Cardigan by Melissa LaBarre. If you don't know her designs, you should pre-order her upcoming new book, New England Knits. It's going to be huuuge.
Yarn: Mas Acero, 3 skeins of 9 MA (?--I'll never understand their naming system)
Needles: Size 6s and 7s
Size: 42
Mods: Only mod was that I was afraid of running out of yarn, so the sleeves were made maybe 2 inches shorter than I would have liked. As it turns out I was right to economize, I only had a smidge left.

This project was a true pleasure from start to finish. I would have finished this project sooner had I not gotten sidetracked with other projects, and the small matter of two entire skeins of yarn getting *$#@*&^% entangled with one another:

Yes, if you can believe it, I had one hot mess on my hands with this yarn. I'm not really even sure how this happened. I decided to leave it out (à la jigsaw puzzle on the cabin card table) and have Herr Curmudgeon untangle it at the dining room table during his spare moments, in between rants about texting & the downfall of our society and the supremacy of prog rock concept albums over all other musical forms.

The ruching effect on the yoke is perfection. The two-button concept is genius, and I will always love the 3/4 sleeve. This sweater has to much to recommend it. So much to love in one sweater. Mwah!

You should check out Babs' version, it's amazing, and she's as gaga for hers as I am for mine. We got talking about sweaters, and she declared herself to be a stalwart cardigan enthusiast. I must say that this got me thinking, and I do believe that the cardigan might be growing on me too. I see its utility, even if I do despise its purling. 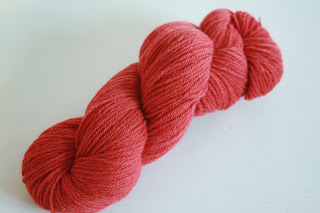 And since the yarn for my Autumn Rose has yet to be delivered (oh how utterly convenient!), I've decided to do the February Lady Sweater (Cascade 220 in Flame, above) for my Knitting Olympics project. And just to keep it ultra-crazy, I'll also be attempting another Back-to-School U-Neck Vest (Ella Rae, #134, below) at the same time. So I will be knee-deep in worsted for the Winter Games, because I'm all about knitting under arbitrary constraints--and you? 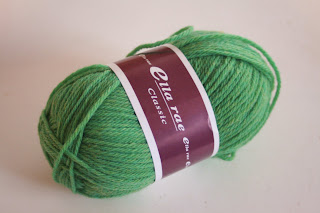 Shawl #1 of 10 Shawls for 2010 is in the can--and completed just in time for SnOMGageddon 2010: The Final Snowening™, no less. Those of you that live in mid-Atlantic know what I'm talking about--the Weather Channel and Weather.com have taken their storm rhetoric to new heights and haven't really left anyplace else to go. I'm hoping that it doesn't get any worse than they've predicted because they've used up all the hyperbole and really might need to coin some new phrases. I guess we were due for a old-fashioned Snowpocalypse™...

Luckily for me, one of the fortunate aspects of this type of day is that the radiators are going full tilt and I was able to block my new shawl/hybrid scarf/wrap in what seemed like seriously less than ten minutes. Which is a lucky thing, because I am dying to wear this lovely whatchamacallit!

The Specs:
Pattern: Saroyan by Liz Abinante from Feministy.com
Yarn: Malabrigo Twist in 'Tuareg', two skeins exactly
Needles: size 8
Mods: Only mod was that I did one less 'non-increase' leaf than the pattern called for. The garment is to my mind the perfect head wrapping length--which how I now wear all shawls, because I'm a tough, old broad.

This is the perfect combination of zone-out (stockinette) and semi-attentive (lace) knitting. I worked on and off on this for several weeks and seriously recommend it to anyone who fancies this particular combo.

Below we have a nod to the real Tuareg, the Blue People of the Sahara. It just so happens that Miss Thing here is also a descendant of another Saharan nomadic tribe, on her dad's side, so this shot seemed so appropriate. And just so she doesn't get too high on her horse, I make sure to remind her that from me she gets hillbilly bootlegger and Lancashire mill worker.