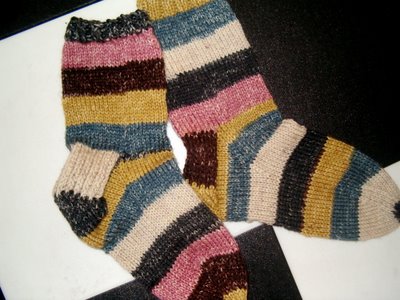 Thanksgiving afforded much time for lollygagging around and klatsching (as my much adored MIL loves to say, she's from Joisey, after all). The highlight was seeing family from far away and of course, having lots o' knitting time. I finished my Big Print socks, and due to my father's freakishly thin ankles, I ended up giving them to my FIL, who was, "touched beyond words. Speachless." It's certainly nice to give a FO to someone who lavishes you with praise, that's for sure. Luckily I have a lot of Big Print, so yesterday I casted on another pair for my dad. Only 40 stitches! My parents brought with them another FO of sorts for me to feature on my blog. 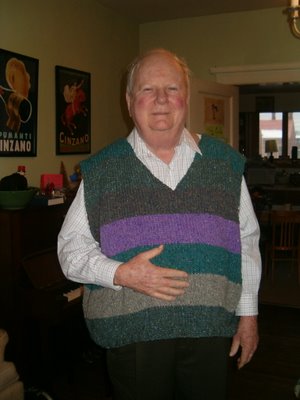 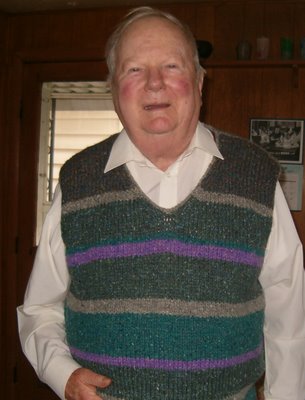 Last Christmas I made my dad a Rowan vest that was, many might recall, Fred Flintstonesque in its' shaping. I include a before and after picture, just for laughs. Luckily in Minnesota there's an expert knitter around every corner, so my mom had her Scandihoovian friend Jean from The Yarnery in Saint Paul work her magic on it, and voilà, suddenly I appear competent and crafty! Speaking of crafty, have you seen the new magazine Craft, yet? It's put out by the same people who do Make, which is also a alt-DIY publication . I subscribed as I am a major lemming, and the first issue arrived, replete with projects like knitted robots and LED powered garments. I tried to explain to my très L.A. brother Bruce and his living doll boyfriend Jon that it's part of the whole indie crafster scene, but they were laughing too hard at my description of what it means to be a riot grrl knitter to really get it. In any case, check it out because it's super cool!
Posted by The A.D.D. Knitter at 9:32 PM

Glad you had a nice Thanksgiving. Not to sound cliche, but your socks...they rock - nicely done, and so fast! Your dad is a total cutie :) Is that really the same vest in both pictures??

I LOVE the socks! I looked through Craft at the bookstore the other day but haven't purchased it yet... considering...

And to think your dad can't wear another sweater under that vest anymore... Those colors are great, though.

Really loving this sock yarn, Nice and thick for a quick knit, especially someone with big feet like my husband's:) Gotta love that it's a superwash too.

Those socks turned out terrific! I just love the colors!

Whatever you had to do, that vest looks great! He looks proud of it! :)

Craft looks like such a fun magazine! I think I'll try to find an issue before I comment to a subscription. But, I could cancel that New Yorker and replace it with Craft. Great socks! It must have felt so nice to get them off the needles so quickly. I love the vest, too.

great stripy socks! Glad to hear the recipient loved them. You dad is such a cutie! He looks so happy in his vest : )

Those socks are super cute! I had sock envy for a minute and made one sock. yep, just one sock. I can't find the yarn to finish the other sock. Anyway, I love the vest. It looks great and it seems like he loves it!